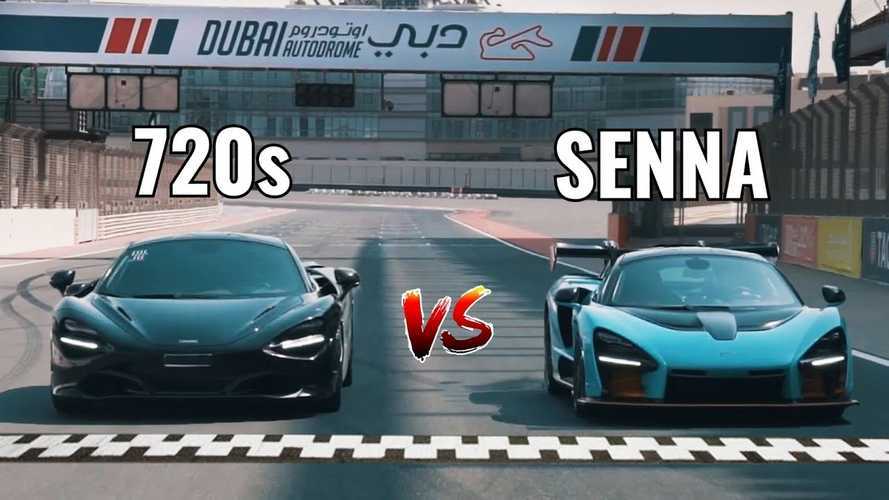 Which car will prevail?


It’s no surprise that the McLaren Senna and McLaren 720S are both incredibly capable machines. That said, which one is the fastest? Formula 1 World Champion Nico Rosberg stopped wondering and put the two beasts against each other in an outright drag race at the Dubai Autodrome.

While the McLaren 720S is mighty impressive, the Senna is a different beast. The Senna’s party piece is the massive amount of downforce (over 1,700 pounds at 155 miles per hour) it produces. Along with its semi-slick tires, it is the embodiment of the “race car with number plates” badge.

Meanwhile, the 720S is still a very capable package. It may not have anywhere near the amount of downforce or mechanical grip as the Senna, but it can still boogie. 710 horsepower (529 kilowatts) in a car weighing 2,914 pounds (1,322 kilograms) is mightily impressive.

Road-Legal McLaren P1 GTR Is Noisy On The Autobahn

Surprisingly, the Senna (piloted by Rosberg) lost the first drag race. After some thought about the result, Rosberg realized that the semi-slick tires on the Senna needed to be much hotter to grip the tarmac properly.

The F1 world champion proceeded to get optimal temperature into the Senna’s tires before the next run. After a couple of donuts and hard accelerations the tires were piping hot and he was ready for the off. Unsurprisingly, in the second drag race the tires hooked up at the start and the Senna took the win.

Following the drag races, Rosberg proceeded to do some hot laps in both the Senna and 720S. Starting with the Senna, he was blown away by the amount of grip and braking performance that it produced. He couldn’t stop referring to it as a race-car-like experience. The world champion even went to describe its rear end grip as “unreal”.

In the end, the McLaren Senna was roughly four seconds quicker than the 720S. With the 720S being on road tires, its performance is nothing short of remarkable. We’d love to see a second video with identical tires on both cars.