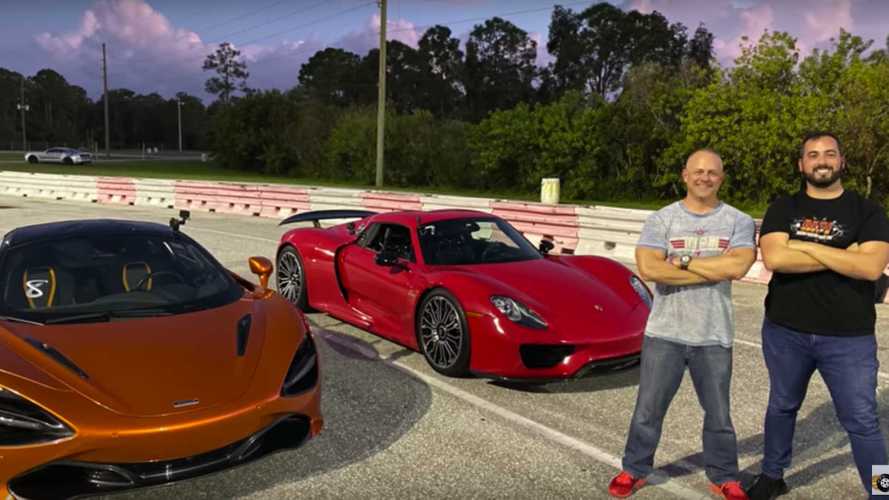 Who will claim powertrain dominance?


It's always cool to see a conventional gasoline powered supercar take on a hybrid supercar for bragging rights. For one, it's always impressive to see how far technology has come; we're seeing even more power and performance from smaller engines and electrically assisted motors. If anything, a drag race like this is a showcase of speed, skill, and technological performance. Something they've been wanting to do for a long time, Drag Times recently posted a video on YouTube, showing what happens when a McLaren 720S goes head-to-head with the Porsche 918 Spyder at a drag strip at Palm Beach International Raceway. And it's pretty darn close.

Representing the plug-in hybrid hypercars of the world is the Porsche 918 Spyder, equipped with a 4.6-liter V8 that's supplemented by two electric motors that make 282 horsepower. In total, the system makes 875 horsepower and 944 pound-feet of torque. The system is mated to a seven-speed PDK dual clutch and all-wheel drive. Huge numbers, and when you factor in a sub 3 second zero to 60 mile per hour time and a top speed of 214 miles per hour, the Porsche 918 Spyder is a definite powerhouse.

The gasoline powered supercar crowd is represented by the might McLaren 720S, offering a turbocharged 4.0-liter V8 with 710 horsepower and 568 pound-fett of torque. Transmission is a seven-speed dual clutch, and the 720S is rear-wheel drive. Definitely nothing to scoff at.

Father Vs. Son In Hypercar Race Between LaFerrari And 918 Spyder

Without giving too much away, the runs are impressive indeed. So much so that the entire video showed that they had to do at least four heats to figure out who would come out on top; yes, it was that close. With no cool downs in between, the runs were done in quick succession, and in the perfect conditions, these cars are both sub-ten runners. Watch the video above to see the results.