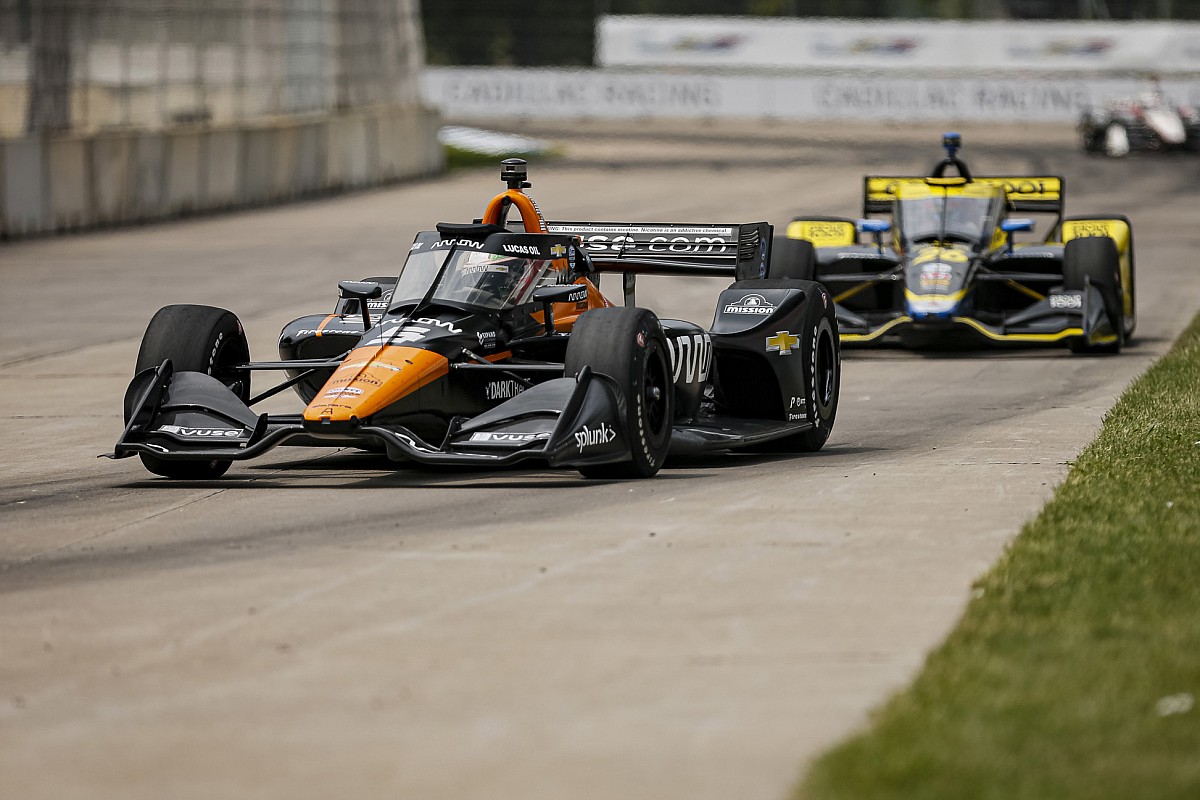 After finishing third in Race 1 yesterday, O’Ward’s Arrow McLaren SP-Chevrolet struck the wall this morning in qualifying, which left him down in 16th on the grid.

However, he avoided trouble at the start of the race to move into the Top 10, and was sixth with 11 laps to go. He passed Scott Dixon of Chip Ganassi Racing-Honda on the penultimate restart, then passed Graham Rahal and Alex Palou in one lap, Colton Herta a lap later and then zoomed onto Newgarden’s tail.

After stalking him for three laps, O’Ward saw the Penske, on tired alternate compound Firestones, twitch out of Turn 6, and drew alongside him on the back straight, making side-by-side contact before diving ahead into Turn 7’s brake zone.

“I had such a great car all weekend and today it was my fault that we started from the back, making it hard for ourselves," he said. "But I knew I had a great car under me.

“This is a Team Chevy territory, I’m so excited and pumped to get them this [win].”

O’Ward, who then pulled out almost seven seconds on Newgarden in the remaining couple of laps, dedicated his win to Rosenqvist, who had to stay in hospital overnight following his scary shunt in yesterday’s race, and to the memory of Mansour Ojjeh, whose partnership with McLaren stretches back to the early 1980s.

“I texted Felix this morning,” said an elated O’Ward, who also won in Texas and has now taken the lead in the championship. “The important thing is that he’s OK, but I told him I was going to win it for ya, and I’m a man of my word!

“And it’s also for Mansour – may he rest in peace.

“I got it done. The guys have been doing a great job and we all deserve this. There’s still so much to go but we need to stay on it and keep pushing.”

Team president Taylor Kiel who also calls O’Ward’s strategy said: “I don’t think there’s words [to describe this weekend]. Any time you have a weekend like that in motorsports, you’re living in recovery mode and trying to make the best decisions that you can.

“Certainly I’m thrilled with the work the team put in to get the car back on track, even more thrilled that Felix is OK, healthy and back with us soon.

“But, man, what an effort by Pato. He drove his butt off. Chevy brought it today, and we brought them a trophy in their backyard. So thrilled for them. What a great day.”