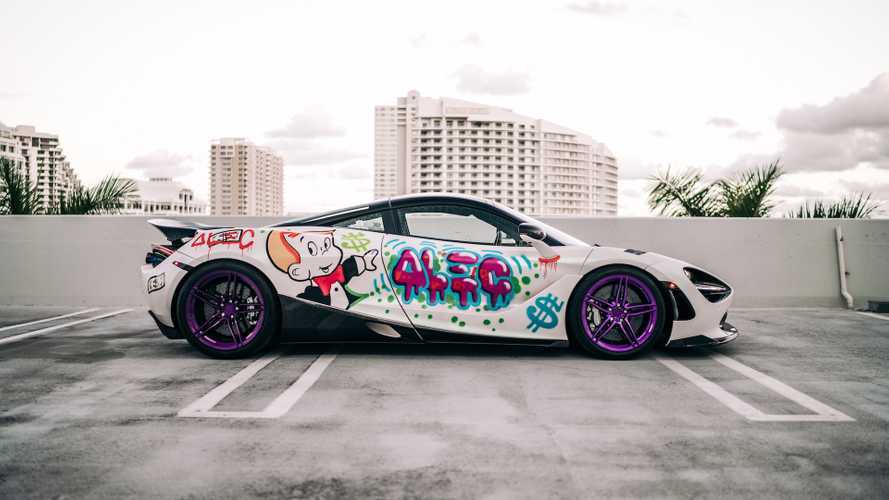 McLaren 720S Gets Spray Painted In The Name Of Street Art

A celebration of performance and art.

The thought of spray painting a McLaren will undoubtedly turn the stomachs of most petrolheads. 1016 Industries commissioned a project to do just that, but they didn’t hire some Joe Schmoe off the street. They partnered with world-renowned street artist, Alec Monopoly.

Rising to fame in 2008, Monopoly became a sensation around the world for his Monopoly man and Richie Rich pieces; both of which are featured on the 720S art car. While the passenger side is embellished with Richie Rich pointing to Monopoly’s signature dripping along the car, the driver’s side features a Monopoly man holding money bags with bills flowing throughout the entire machine. The 720S provided to Monopoly isn’t standard either. The tweaked McLaren is outfitted with 1016 Industries carbon fiber body work which consists of a race hood, front aero lip, lower front lip, side skirts, fender set, mirror caps, rear wing, and rear diffuser.

All of the carbon fiber body pieces are valued at over $65,000, as they are molded utilizing 1016’s proprietary compression process. All of this adds up to the carbon fiber pieces being stronger, lighter, and even prettier than the competition. 1016’s carbon layup process leads to a marbled aesthetic upon completion. All said and done, this is quite a special car for quite a special occasion, specifically the Art Basel exhibition in Miami (a premier art event in the Americas).

“The opportunity to work with an artist of Alec Monopoly’s caliber developing a truly unique piece of art that highlights our new 1016 industries McLaren 720S is a real honor,” said Peter Northrop, CEO of 1016 Industries.

While Monopoly is well known for his street art and pop culture fusion, 1016 Industries is known for its tuning knowhow. The collaboration led to an amazing piece which the masked artist drove around the Miami area while attending Art Basel.

Save The Planet, Bid For This BMW i8 Art Car By Milan Kunc